With no previous experience with V-color, we can only say that the package sent was one of the most thorough introduction kits we have ever seen. Not only did we get the sample, but there were sticker sheets, which are cost-effective ways of making people smile, but we also received a folder with all of the literature we could ever need. Props go out to V-color for starting on the right foot and delivering confidence to this reviewer before we ever got to opening the RAM. While their attention to detail may not correlate to all matters across the board, all we can do is hope and let the chips fall where they may.

We have you here at the moment because V-color sent over the Manta XPrism RGB SCC 2+2 KIT. In these kits, not only do you get two RAM sticks, but to fill the other two slots on many motherboards, V-color offers dummy sticks for added lighting and a slicker overall appearance. Even though many did this when DDR4 was all the rage, until now, we have yet to test these types of kits. Nevertheless, from a virtually unknown player in the DDR5 game, V-color jumps into the fray to see if they can get a recommendation from us by running with some of the big dogs and hopefully being worthy at the end of it all. 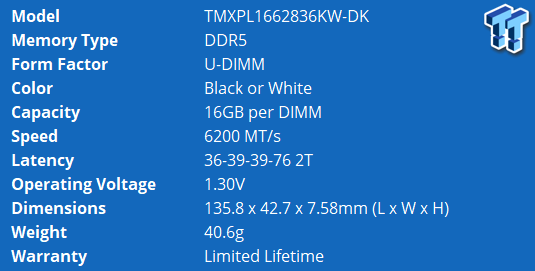 Falling right into line as it should, this 6200 MHz kit nets us 95996 MB/s read performance, just above the Lancer and behind both 6400 MHz options. Again, a reduction in timings was not the advantageous approach, as we lost a bit of performance there, but we hit the highest ever, 104500 MB/s running our Manta XPrism at 6800 MHz. The reasoning many will take from looking at this chart is that the Manta XPrism does well; look at that latency. In this instance, you would be correct, as latency helped to keep the V-color sticks from losing ground, and the tight timings didn't hurt these results either. Remember, most of these kits were running 40-40-40, not 36-39-39. The Super Pi scores show that it favors the crap out of the V-Color Manta Xprism. Even though our best run was with the XMP setting active, all runs were sub-six-minute, and this is the first kit to do it with the XMP profile. While tinkering did not net us any advantages, the times are still very tight together. Final Thoughts
Early on, there is a high-end feel. The box is simple yet effective without putting product images on it. The inner packaging is just as nice, and when they show the kit, it is naked with the part number found under the hood, exposed for all to see, without the potential of lifting an IC from the PCB. Even down to the appearance and choice of aesthetics, there was never a time when we felt we were looking at a sub-par product. While new to us, V-color appears to have things buttoned down, and know what many potential customers want.

The looks are above average. Even with the simpler V-shape embossed on the heat spreaders, it is the diffuser that steals the show. Not only does it remind us of what G.Skill offered with the Royals, but the intensity from each stick is bright. With the addition of the extra Non-DRAM Filler sticks, the illumination gets much better for mainstream motherboard users. While many may overlook them, we also liked the buttons on the sides of the sticks, near the top, with the five on them, adding just the slightest touch of RGB to the sides. We also liked the lack of actual stickers, where V-color opted to print the information directly on the heat spreader, allowing it to blend in and not stand out like a sore thumb.